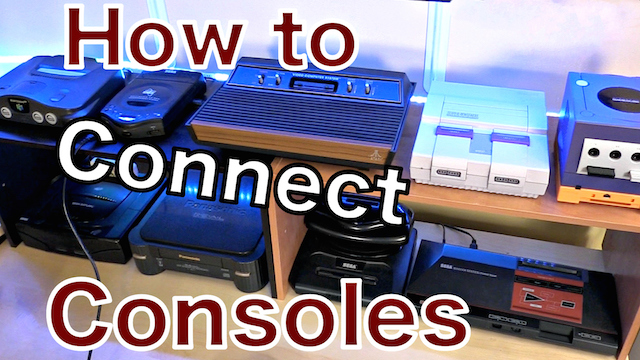 I have 40 years worth of game consoles connected to two televisions in my Game Room. Here is how I connect most of them.

Video Transcription:
Metal Jesus here and I’m back again with another video. But this time it’s a companion to the game room to our video I did a little while ago, you guys love that video. But a lot of you had specific questions about how I connect all of these consoles up, you want more details. Well, that’s what this video is going to be. I’m going to attempt to show you exactly how I hook up all these different consoles, all the different wires, all the different switch boxes, everything. I think you guys are going to like it. Let’s take a look.

I have two televisions in my game room and we are going to start with HDTV, and how I configure all the consoles on the right hand side of my game room here. The majority of these consoles right here do composite video that is the one yellow cable that a lot of these consoles do, not all of them. You see I have 20600 here, but it’s not setup, we are going to cover that in a little bit, but for the majority of this what I need to do is to get that one yellow cable, that one yellow video cable to upscale to HD. So how do I do it, we’ll let’s follow the chain of events here. Let’s go to the Sega CDX. This is a Sega Genesis with a CD built in, and this does composite out so let’s put the game in. So I send that signal to a switcher, this is a composite switcher that has labels for all the different systems that are currently set up for it. So you see the Saturn, CDX, N64, Sega Master System there and I switch back and forth. The video that goes out to this enko products HDMI converter this takes composite and upscale to HDMI.

And it has a little switch to do either 720p or 1080p, but because I have a couple different HDMI devices , I send it to this HDMI switcher here and that way I can have the RetroN 5 which I will cover in a second as well as Elgato game capture, already setup and ready to go. Now you may have noticed I didn’t sent the audio to this device. I actually sent that straight to my Mackie mixing board. And I do that because I want to have a bit more control over the overall volume. Also I happen to have a really nice studio monitors, I have this KRK studio reference monitors here that make everything sound just fantastic. So I try to send as much as I can to those speakers. But at the end of the day, it up-scales to my HDTV as you can see here, and it looks pretty good. It’s not the same as an actual CRT because it’s up-scaling those old pixels and that old resolution. But it’s definitely doable and it look pretty good. For a lot of people the RetroN 5, myself included, is a really nice option for up-scaling a lot of your original games. And I want to cover that a little more in depth here, because it’s a nice option for a lot of people. It supports Famicom, NES, Super Famicom, Super Nintendo, Genesis, Mega Drive, and it even has support for up-scaling your Game Boy, Game Boy Color, Game Boy advanced games. As well as you can use the original controllers, I know I’ve mentioned the system a lot, but it’s nice because it really does look fantastic on a modern TV, and like before I send to this HDMI switcher so I can go back and forth pretty easily.

Now there’s an entire generation of consoles through the 200’s that supported component video, that’s where the video signal is divided into three different cables. And that’s a really nice option for me, so I have the PlayStation 2, the PlayStation 3, the Wii, the Xbox 360 and the original Xbox all going out to component. That component video is divided by and switch between this two component switchers here, so one of them is Monoprice and the other one is Gigaware. And the only reason why I chose this is simply because it worked out the best for what I need, and in finally what I have also in here is the PSP. So a lot of people don’t realize that the PSP 3000 will also output to component video, but there are some exceptions and the Dreamcast is one of them. So the Dreamcast will output to VGA, which is kind of interesting and I think that’s the only console that does this. But my TV happens to support that. So I just needed to get this little box and basically it allows to output to VGA which is a really nice resolution on this TV. And then there is the Panasonic 3DO which has the option for S video, again my TV supports that.

And to wrap up this side of my game room, I have a futon here and I like to kick back and listen to music. So I have two options. I have an input for an iPod or iPhone as well as my turntable and those are all plugged into Mackie mixing board. Coming out to those studio monitor speaker and it all sounds fantastic. Now let’s go to the other side of my game room where I have just a massive old school CRT for two reasons really. One of those reasons is I love light gun game and old light guns do not work on modern HDTV’s, so I had to have one of these old school TVs to do that and that’s primarily what my PlayStation 1 here is set up to do. But I also have a lot of old consoles like the original Atari and 7800 setup here as well as in television the ColecoVision and also the Turbo Grafx. The problem is that if the console is really old from like the 70’s or 80’s it probably does RF out and RF is the old standard where it’s one cable for the video and the audio. And most new modern televisions don’t even have an input for it. So you need this old school CRT’s. For me I just have a very simple switcher for it. This is where I can also hook up my original NES, if I want to and that’s sort of stuff and just switch back and forth between those. In addition to that I also have a composite switcher very similar to the one I have over on the right hand side, but again this is just for the PlayStation 1 or also I happen to have here an original VHS and a DVD player just in case I wanted.

All right. Well that’s how I connect most of my consoles to my TV and stereo, but if you have further questions, go ahead and post in the comments below and I’d be happy to give you some more specifics and speaking of every game room is slightly different. So my solutions may not be what works best for you depending on what you have, and what hardware you got, what TV and stereos and things like that. So I’d love to know what solutions you guys came up with and maybe we can help each other out. As always I want to thank you for watching my channel and thanks for subscribing. Take care.