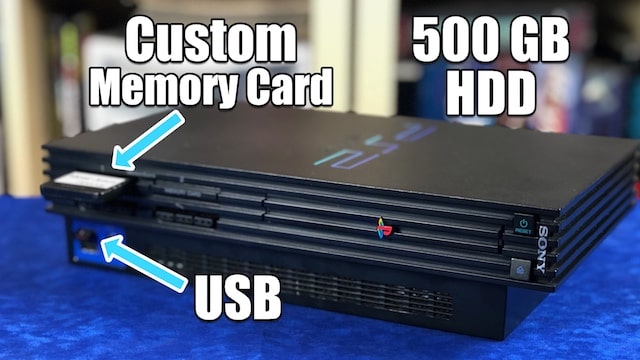 It’s possible to output a standard PlayStation 2 (PS2) with High Definition graphics in either 1080i or 1080p, with NO MODS to the inside of the console. Here is an overview with gameplay footage.

– [Metal Jesus] Hey, guys, Metal Jesus here, and today I’m back again with a pretty cool video. This is a modded PlayStation 2 to output HD. However, what’s unique about this is that it doesn’t require any modification to the inside of the console itself. It’s completely software-driven, and it’s pretty neat. So I was contacted by this guy named Chris who said he and his buddy, Brian, had been working for quite a while to find the perfect mix of the software that’s out there on the Internet to bring it together, to figure out what versions are perfect to try to get the maximum amount of resolution and performance out of the PlayStation 2. Now, right off the bat, I do wanna mention that this is using the PlayStation 2 fat model, the original, because it also includes a hard drive in there, and obviously the slim model doesn’t support that. So to get this running, you basically plug in a custom formatted MagicGate memory card. And you see one here labeled Metal Jesus Special. You also plug in a USB thumb drive into slot one, and then also this one has a hard drive. One thing to know about the hard drives is that, originally, when the PlayStation 2 launched, it supported IDE hard drives, so that’s a older style connector of hard drives. However, for this one, he is using a third-party solution here that supports SATA. And this particular drive is 500 gigabytes.

Let’s go ahead and turn it on and check it out. So what Chris did is he basically did a bunch of research to figure out just the right version of an application called FreeMcBoot, and then he paired that with the right version of OpenLoader. And essentially what that allowed this to do is kinda push a standard PlayStation 2 console to be able to output most games at 1080i or 1080p, or true HD. He kinda described to me as though he’s sort of replacing the standard graphics driver with something that is way more optimized and way more powerful. Let’s very quickly walk through the menu here. So on this device you have installed uLaunchELF. So this allows access to the USB thumb drive as well as the 500 gigabyte hard drive and also the memory card. There you have listed ESR. So that is part of the FreeMcBoot package, and that basically allows you to play backups. So what that is doing is that’s actually tricking the PlayStation 2 into thinking that you’re putting in a DVD movie, when actually you’re really just booting up a game. Simple Media System I believe is part of a package that allows this PlayStation 2 to play DivX movies and some other video formats that you would download over the Internet. Not something I probably will use, but it’s cool to have it there.

Now, like I mentioned, this particular PlayStation 2 came to me pre-setup by Chris, so I actually don’t know all the ins and out of the applications and how to configure that stuff. So I’m not gonna go really deep into all of that stuff. Just know that there are a bunch of tutorials out there on the Internet, both on YouTube, and also the web, and I’ll link to those down in the video description below if you wanna make one of these yourself, but we’ll continue on. Notice that he integrated in CodeBreaker cheat program. That’s pretty cool. You basically launch that, and then there are hundreds if not thousands of PlayStation 2 games that you can tweak, enable cheats, and then launch right from there, and just go into the game, and, again, it’s very seamless. Also included on here are a bunch of emulators, so you have the original NES, Super NES, Genesis, Master System, GameGear. Probably not gonna use that too much, but it’s cool to have. The GSM is the graphics synthesizer mode selector, and it’s my understanding that’s kinda the nuts and bolts of this device. It’s what is allowing you to tweak the video performance and essentially get the most out of this.

Alright, so let’s go ahead and check out some games. So this is Need For Speed: Hot Pursuit 2. And this is outputting from the PlayStation 2 at 1080p. Now, this game never officially supported this resolution, but, again, with this modded PlayStation 2, it’s now outputting at that HD resolution and it connects and looks great to your modern HD television. Here here is Return to Castle Wolfenstein. This is also outputting at 1080p. I should probably mention at this point that the way I’m capturing this footage is that I’m using the component cables that HD Retrovision sells. And that is connected to my original Elgato Game Capture. Also, the output is stretched to widescreen 16 x 9 to fill the entire screen. I’m not a big fan of that look, and thankfully, most HD televisions have the ability to adjust the aspect ratio. And I’m compensating for that in Final Cut, so just be aware. Here is R-Type Final. Now, this is interesting because this is a game that actually runs a little bit better, a little bit more stable, in 1080i. And so that’s what you see right here. And so what Chris and Brian did is that they went through a bunch of PlayStation 2 games to see which ones would run better in what resolution. And that’s what you see right here in this manual that they sent. It was at this point I was kinda curious how it would compare to my favorite way of upscaling PlayStation 2 games to HD and that is using my original PlayStation 3.

So the first game we’re gonna compare is Lord of the Rings: Return of the King. Alright, so here is a side-by-side. So, on the left you have the modded PlayStation 2 outputting to 1080p over component, and then on the right is my trusty PlayStation 3 running the same game, but that is going through its upscaler and it’s going through HDMI. The results are pretty interesting, don’t you think? I mean, in some regards, I actually like the PlayStation 2 modded better because I think the colors are brighter. They’re more vibrant. But you definitely are seeing the jaggies. It’s not quite as smooth of a picture where to the right, on the PlayStation 3, yeah, the colors and maybe the contrast is definitely a little bit less, but it’s perhaps maybe a more softer and pleasing video quality. I should also mention I’m not using the smoothing option on the PlayStation 3, although we are gonna try that in a bit.

Here is Star Wars: The Force Unleashed, one of the best Star Wars games ever made. Once again, we have the modded PlayStation 2 on the left. That’s via component cables. And then on the right, we have the PlayStation 3. The differences between the two are just striking. I mean, wow, I had no idea until I actually put these up side-by-side. Now, obviously, the modded PlayStation 2 on the left, that’s a little on the dark side. Well, no pun intended. But I actually really like the sharpness of the graphics. I think it actually looks really good. I think in this case, because this game is so dark, I probably prefer the PlayStation 3, but as you can see, I mean, the modded PS2 holds its own.

Alright, now let’s try something a little bit different. Here is Freedom Fighters. This is a game I’ve been wanting to go back and play for a while now. And like before, on the left-hand side, you have the modded PlayStation 2. It’s important to know that, for this particular game, the best resolution was 1080i. And then, of course, on the right you have the PlayStation 3. As you can see, both versions of this look pretty close. Pretty identical. But I wanted to show you what it would look like with the PlayStation 3 and smoothing turned on. With a scene like this, if you look at his sleeves, you can definitely see on the right-hand side that the PlayStation 3 is doing a little bit of smoothing. But again, it’s not radically better. I also wanna mention that I did get a lock up, a hard lock up in this game after about 10 minutes or so. Now, you can always go back to the main menu and adjust the graphics settings. You can actually force it into, say, 720p or something like that; see if you get better results.

Now let’s go ahead and check out some original PlayStation 1 games running on the modded PS2. So this, of course, is Wipeout XL, and it is outputting at 480p. Looking and running great. However, Soul Blade is not doing so hot here. As you can see, my character is having some problems with the polygons. While the game is perfectly playable and kind of hilarious this way, but yeah, you wouldn’t wanna play it this way for very long. Not sure what the problem is here, or maybe if there is a fix through the settings, but yeah, it’s kind of funny.

SO what do I think about this thing? Well, man, I think from a technical standpoint, I think it’s actually kind of amazing how it is taking a standard PlayStation 2 and basically just with better software forcing higher resolutions and pulling it off. I mean, these games actually look pretty good. As a hobbyist project, I think it’s actually pretty impressive. And the good news is, there are literally tens of millions of these PlayStation 2 fats out there. I mean, it doesn’t require any modification to the inside of the PlayStation 2, so if this one, you know, a couple months from now dies on me, well, I’ll just swap it over to another one. They’re not that expensive. The compatibility can be an issue. Like I mentioned previously, I did experience some lock-ups in some games, but there are a ton of options to play around with. And for this particular model, he tested about 160, 200+ games and most of ’em work just fine. Obviously, I didn’t include instructions on how to actually set this up, but I’ll include links to tutorials down in the video description below. And then, again, a huge shout-out to Chris and Brian for sending me this. It’s such a cool device. It’s such a cool project. Thank you so much for sharing it with me. I’m probably gonna use it going forward when I need to capture footage and test things. It’ll be pretty awesome. Alright, guys, thank you very much for watching. Thank you for subscribing and take care.