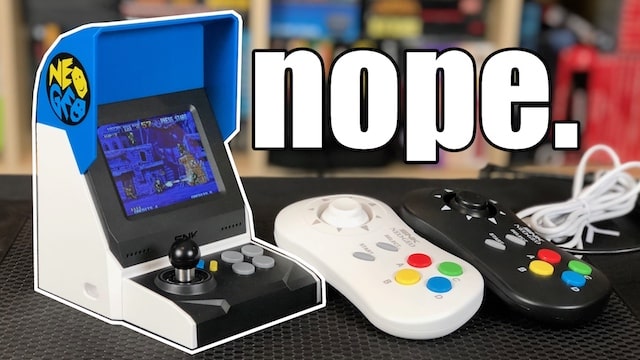 PROS:
– Nice looking
– Easily portable.
– Built in Screen makes it so you can play it anywhere.
– Games look great on the small screen!
– 40 included games is a good value

CONS:
– non clicky thumbsticks – hard to do?! Ok… You did it before…
– 720P output – kinda blurry & disappointing on an HDTV especially when compared to the sharpness of the NES/SNES mini
– Smoothing option for video…but doesn’t help
– No battery?! Why?
– No wall adapter for USB-C cable? Why?

– – Hey guys, Metal Jesus here. Now today I’m gonna review the NEOGEO mini. This is the international version right here and a lot of people are curious about it. Now some things are very cool and some things are pretty disappointing. Let’s take a look. Now before we get started here I do wanna mention that SNK sent me this review unit here however no one is reviewing my content before it goes live and all of the opinions in this video are my own which will be pretty obvious considering that you’ll see I’m not exactly in love with this thing. With that out of the way you can see that I have the console itself as well as two of the optional controllers and then as a little surprise they are also selling branded NEOGEO HDMI cables. Again, completely optional but they did send them. Let’s go ahead and dive right in and as I mentioned in the intro this is the international version. Now there is a Japanese version as well, the biggest different being that the games included on it are slightly different. So here are the games that are included on this one here. You see that there are 40 classic NEOGEO games. 14 of them are different than what you would get in the Japanese version. Obviously these mini consoles are super popular today. There’s lots of different companies bringing these out. But as you can see, one of the more interesting features of this one is that it includes a 3 1/2 inch LCD screen. To give you an idea of the size I’ve placed it next to the Nintendo Classic here and I do think it has about the same footprint although obviously as you can see it’s much higher. That’s because of course it has a screen. So in general, actually, I think the size is perfect if you wanna have it on your desk. Zooming in on the controller itself we have, of course, on the left there the joystick, select, start. And then pay attention to the buttons there. A, B, C, and D. Now those might be in a slightly different orientation than you’re used to but we’re gonna come back to that in a bit. Also of note here, the joystick is not clicky like you would normally expect a NEOGEO controller to be. And again, we’re gonna come back to that in a little bit. Swinging around to the back of the unit, you have your on/off switch. There is your HDMI out if you wanna connect it to an HD television. Headphone jack and this is where you plug in your USB-C power adapter. It’s important to note that this comes with the USB cable but not the actual adapter to plug into the wall. Not sure why they did that, it’s kind of annoying. Booting up the device, here is the interface and you can see here it actually is pretty nice looking. Very simple, has all of the games laid out horizontally, you cycle through them. You can access the settings by hitting start and select although we’re gonna go into that in a little bit more detail later. So let’s go ahead and play some games. And we’re gonna start with portable mode here. So this is how it would play if you bought it without any of the accessories and as you can see there it’s using the analog joystick. It doesn’t feel like a normal NEOGEO controller but actually it works really well. And you guys know that obviously I’m big guy, I’ve got big hands and I was able to control my games and play them just fine on this. I mean yes, it’s cramped, it’s not optimal but it’s totally doable. Also I noticed immediately just how crisp and nice looking this 3 1/2 inch LCD screen looks playing these games. I mean, it looks fantastic when you’re playing it. I was really surprised, actually. Okay, so it plays in portable mode, it’s good.

So let’s go ahead and check it out if it’s connected to your HD television. So we’re gonna plug in the official NEOGEO HDMI cable which you don’t need to have, by the way. They just sent it so of course I’m gonna have to use it. And we’re gonna go into settings where you can set the language, you can also sort your games if you wish, but under screen this is where you can set how you want it to look on your HD television. Either stretched out or in the original 4×3 aspect ratio which is kinda what I prefer. There’s also a setting called Image Quality Optimization and really what that is is an artificial smoothing out of the pixels through the emulation. Some people like it, I’m not crazy about it but you can play with it if you want. Here is the original Metal Slug running on the NEOGEO mini through HDMI. And couple things here, the first thing, when I first launched it I actually was like, why is it not sharp? I wonder if there was a setting but no, this is actually how it looks. So this is obviously stretched so it’s not in a 4×3 aspect ratio but really it’s running in 720p which again is not terrible but it’s not great either. I don’t know what I was expecting but I was definitely looking for something a little bit sharper than this. And then I got to thinking, am I crazy? Because I also have Metal Slug running on the Switch which is what you see right here. Now, to be fair, the Switch is outputting to 1080p not 720p and yeah, actually, the Switch isn’t much better. So I was kinda like, wow. I guess I kind of expected more. I expected this to be like a great NEOGEO experience. And then I got to thinking, I was like, wait. Doesn’t the Super Nintendo Classic look better than this? So hooked this up and I was like, oh, yeah! See, this is what it should look like! Nintendo gets it. Keep in mind the NES Classic is cheaper and the games look better. Now I know it’s not apple to oranges but there was a time when the NEOGEO was the premier gaming system on the planet and it’s just kind of disappointing that for this one the quality is not there. I guess what I’m trying to get at is that I was hoping since this is an official SNK NEOGEO mini console that they would make it the best version possible. Now again, in portable mode, I think it’s acceptable but video out, you can see here. It’s just not as good as it could be and that’s really disappointing.

Alright so, video out kinda disappointing. But let’s go and check out the optional controllers that they’re selling. So they have a white one and a black one. And I gotta admit, these things look pretty awesome. Kinda like the Nintendo Classic, this could be a great solution for leaning back on the couch playing these games on your HD television, also with a second player! But they made some really disappointing decisions. Check this out, this is the new controller and there are no micro switches. This is 100% analog. Now here is the original NEOGEO CD controller released in 1994. Hear those micro switches? That’s how this should be. So I was curious, reached out to SNK and asked them why did you not include micro switches? Okay, I guess. I mean to be fair this is a decent controller. It’s just weird. I always in my mind when I think of NEOGEO I do think of those awesome thumb sticks. It’s just disappointing that they changed it for no apparent reason other than it’s just hard. Another change I noticed is the button locations. So on the top there is the original NEOGEO CD controller from 1994. On the bottom is the new one. And then notice how the A, B, C, and D buttons are in just different locations and this actually matches the front of the console as well. The thinking here might be that this is more comfortable for modern gamers. I have no idea but if you’re a longtime NEOGEO fan, just be aware you’re gonna have to kinda get used to that.

So if you wanna pick this up it’s gonna cost about $100 and then those individual controllers are around $25 apiece. Who is this for? Well, I think if you’re very nostalgic for the NEOGEO and you wanna set it on your desk and play in portable mode this is actually a pretty good deal. It comes with 40 games. Now I do wanna mention that it’s a bit of a missed opportunity that they didn’t include support for using batteries. It has to be plugged into power all the time which again, doesn’t make much sense. I think it would’ve been really cool to at least have the option to but your own batteries in but again it’s not a deal breaker. Also too, I wanna mention that the reason why I was doing the comparison between this and the Switch is because a lot of these games are already on the Switch and frankly they look a little bit better. So if you don’t need the 40 games and you’re really trying to play them on an HD television there’s a bunch of other ways to get those games and often they’re cheaper. So anyways, guys, I’d love to know what you thought about this video and what you think about the NEOGEO mini. Are you planning on getting one? Love to know down in the comments. As always I wanna thank you for watching my channel. Thank you for subscribing and take care.

I don’t know, am I expecting too much from these companies? I know that these mini consoles are only $100 but Nintendo did it right! Nintendo set the standard with their amazing classic consoles and I’m sorry but these other companies are gonna have to step up or don’t even do it at all because we love their stuff so much. Just give us the best product possible, alright guys? Thanks for watching.