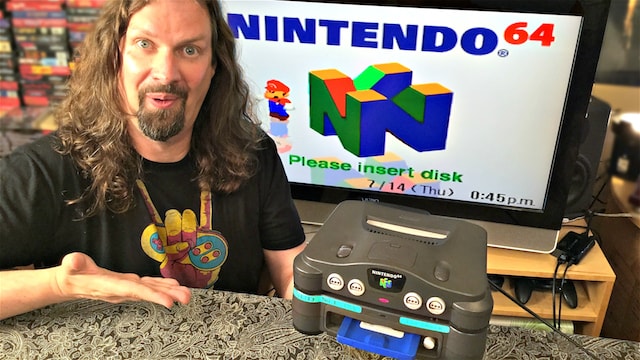 In the mid 1990s, Nintendo announced the 64DD disk drive add-on for the N64 for the US market ….but it never came out. Instead the Japanese version of the drive crashed and burned upon release and it took all the hopes of US gamers ever buying one along with it. For almost 20 years it was consider a myth that an actual US retail version exists… until now. I have found a working prototype of the 64DD for the US market AND it contains a developer blue diskette inside of its drive. This unit is unique in many ways and in this video I tell you all the things that make it special…and what happens next…

This is the front of the Nintendo prototype 64DD for the U.S. market. I explain what those labels mean in the video.

The Prototype 64DD boots up in English without a Partner N64 cartridge!

This is everything that came from the Craigslist pickup including some cool Japanese released games.

This is the serial number and label on the bottom of the 64DD prototype. There are several things unusual about it.

This is the mysterious blue developer floppy disk found in the prototype 64DD. I hope to discover it’s contents soon!